Buying a Home with High Radon

Buying a home with high radon is not really a problem. In many areas of the country like central New York the majority of homes have high radon. This is why most home purchase agreements are contingent upon a radon test. When those radon test results come back at or above the EPA action level of 4.0 picocuries, most sellers are willing to negotiate in order to save the deal. Usually they will have a radon mitigation system installed or issue a credit to the buyers for the cost of a system.

Be Sure You as a Buyer Negotiate Who Installs the Radon Mitigation System, or get a credit so you can have a quality system installed after you move in. Unfortunately most home buyers don’t do this and most sellers hire whoever can get it done for the cheapest price. Hiring the cheapest company or person to install a radon mitigation system will usually results in substandard system with little or no real warranty.

Require a Third Party Post Mitigation Radon Test if a radon mitigation system is installed prior to closing. This will help ensure the system is working properly. An ideal post mitigation radon test result would have an average below 2 picocuries, the lower the better. For real estate transactions usually anything below 4.0 pCi/L is considered acceptable, but most people would not comfortable with 3.9 pCi/L especially if a radon mitigation system is installed. As a buyer its not a bad idea to have your own post mitigation test conducted to confirm proper operation of the system and to ensure an accurate radon test was performed.

Home Buyers Need to be Wise as Serpents and understand that home sellers, realtors and radon contractors are aware of what’s riding on radon test results conducted during a home sale. This goes for the initial radon testing at time of home inspection as well as post mitigation radon tests that certify satisfactory system operation. They are well aware that high radon test results could jeopardize the sale and or cost them money in repairs or lost commissions. Realtors, radon contractors and most home owners are also aware that is is not too difficult to cheat or effect the radon test results in their favor by opening windows or doors or by other means after the inspector or tester leaves the home.

Examples of Cheating and Fraud – Cheating is fraud when it comes to radon testing. Some people end up buying a home with high radon unawares. Unfortunately more than a few times I have caught home sellers, realtors (usually the listing agent) and radon contractors cheating or fraudulently altering the radon test or test reports. Most home sellers, realtors and radon contractors are honest and would not do such a thing but when it comes to selling homes and radon testing or certifying radon mitigation systems fraud takes place more than most people realize. Following are a few examples of the many I’ve experienced first or second hand. 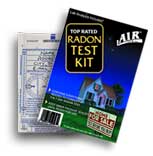 To Be Safe Conduct Your Own Follow Radon Up Test after you are in the home. Certainly most people who commit radon testing fraud get away with it and in most cases it goes undetected for many years. Not until the home is re-tested are people surprised with higher radon test results. This usually occurs when the home is being sold again and a new buyer has a radon test performed. After moving into your new home its a good idea to do a confirmation radon test to confirm a safe radon level. Self test radon kits are cheap and sometimes free. For under $25 you can conduct your own radon test just, it worth it to breathe safely. You can get a radon test kit form NY State for $8.50 a great deal if you are not in a hurry. Fill out the form and mail them a check, it takes 6 to 8 week or more to get the test and up to 3 months or more to get the results. Go here for $8.50 NY radon test kit.

The Radon Level is Much Higher Than When We Bought the House – Very often I hear from people when selling their homes after buyers have a radon test done, “The radon results are many times higher than when they bought the house.” In some cases this could be attributed to fraud but more likely it’s usually due to energy efficient improvements that have been made since the last test. The more energy efficient a home is, the better it holds in heat and also the better it hold on to radon.  High efficiency comes at the the sacrifice of fresh air ventilation.

Even More So With Mitigation Systems – Higher radon levels when selling seems to be more the case in homes with radon mitigation systems. For the same reasons as listed above or due to failing or inadequate radon system installation. I’m always confounded at people who had radon mitigation systems installed and never had a post mitigation test to confirm the system was working properly. The just assumed the system was in and the radon was gone. Pretty trusting souls. A good radon contractor will conduct their own radon test to confirm satisfactory operation and also provide some type of third party post mitigation radon test. This is what I do, I conduct my own radon test to certify satisfactory operation of the mitigation system and provide a third party test kit that includes laboratory analysis fees for the home owner to confirm proper system operation.

Leave Your Comments on buying a home with high radon or if you have any examples of radon testing fraud I would be glad to hear them, just leave a comment below. I believe its important for people to be aware of potential fraud  to help defend against it. Thanks for reading.