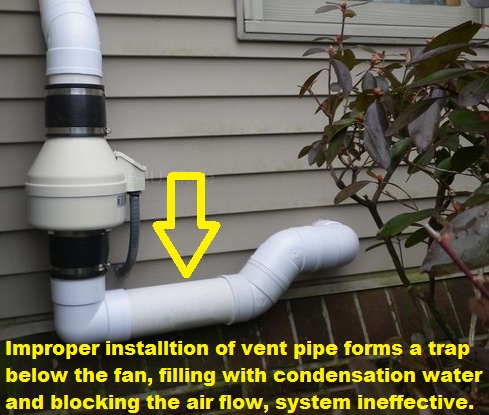 These are some pictures of improper and poor radon mitigation jobs. Some radon contractors could care less about aesthetics, mitigation standards or safety and often don’t give the homeowner a choice as to where or how the system is installed. Some estimates for radon mitigation are solely based on the cheapest, fastest and most convenient installation possible.

Buyers beware when hiring radon contractors. Saving $25 or $100 dollars on a cheaper system may not turn out to be such a good deal. Unfortunately in NY State there is no real regulatory oversight on radon mitigation and there are a lot of shoddy radon mitigators out there.

The above picture is a really poor installation. The pipe needs to be cut out and replaced to remove the trap that was made under the fan. All radon vent piping needs to be back pitched to the suction point so that all condensation water drains down into the ground.

These pictures are from radon mitigation systems I’ve inspected or repaired and some I found on the web.  In contrast to the pictures below be sure to see our radon mitigation pictures of aesthetically pleasing and skillfully installed systems. 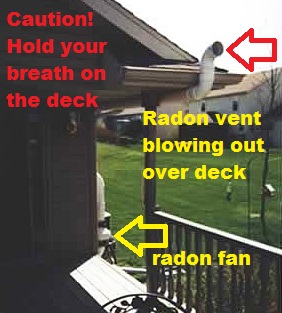 In these sub-standard systems the quality of components, longevity and efficiency and even safety are often not given a second thought and the warranties are practically worthless in most cases. Some of these guys work a niche of realtor referrals installing cheap systems for the sellers in real estate transactions. The sellers don’t care what the system looks like, they just want to spend as little as possible to get the house sold. Most often the buyers just want the high radon fixed and don’t realize the impact a poorly installed system

When buying a home with high radon be sure you negotiate who installs the system, or get a credit so you can have a quality system installed after you move in. I get called in to fix these systems because the installers can’t be found or won’t return to the job. It’s poor quality systems like these that motivated me to start a professional radon mitigation company to provide a better alternative.

But in snow country, you don’t want the vent pipe to extend above a roof eve if there is a possibility of a snow slide that could break the pipe. This is even more of a concern if there is a steep roof, a metal roof and or if the vent pipe is the thin wall, weaker 20 gauge PVC pipe that most contractors use. Even with the use of heavy duty schedule 40 PVC pipe, a snow slide could easily pull or break the brackets loose causing the whole system to crash to the ground. This blue house’s radon system may survive but it would have been wise to install an additional bracket on the pipe at the roofs edge for extra support.

Here the radon fan is enclose in a shroud or cover. This cover and vent pipe material can be painted to match the color of the house and can look quite nice. But sometimes the fan cover almost looks worse than the fan by itself, especially if the color does not match. Decide for yourself, the cover is about 3 to 4 times the size of the fan so it can be more of an eye sore than the fan alone and the cost for a cover installed with system is bout $100 extra.

Here is a dirt crawl space area that has be nicely sealed with a radon barrier sheeting. Sometimes it just needs to be sealed air tight around all pillars etc. and sealed to the walls all the way around. Also if needed a suction point can be placed under the tarp and tied into a radon fan mitigation system, to suck radon away.

The air exhausted from this vent pipe may have extremely high radon levels many times that of what the indoor radon level was prior to system installation. Also the noisiest point of the radon system is at the termination of the vent from the turbulent air flow escaping the pipe. The higher the pipe, the quieter.

The fan in the radon mitigation picture seen on the left is mounted inside the living area of the home, specifically, in the basement. This is not safe because if the fan or any fitting inside the house:

3. is damaged, this fan could pump extremely high levels of radon into the house.

Radon pipe terminates too close under a wood soffit

If you look closely, in the photo on the left you can see black mildew growing on the wall above the vent pipe. This is due to the moist air blown on it from the pipe. The air pulled from under the basement floor by the radon fan can have high amounts of moisture (up to several gallons a day).

Radon vent termination angled away from wallThis pipe could not go around the soffit because the electric service line was in the way.

HOW THE ABOVE VENT SHOULD HAVE BEEN INSTALLED… see the radon mitigation picture on the left and notice the 45 degree angle on the top of the pipe to direct the air out away from the wall and soffit to prevent mildew, peeling paint etc.

Sometimes clients do not want the pipe to go all the way up a large high wall. Since there were no windows above and none within 10 feet to the sides, this is an acceptable application.

It looks better than extending up around the soffit. It will also make it much easier to service, to change the fan at a future date, with a shorter, lighter weight pipe above the fan.

NOT SURE WHAT THIS EVEN IS?

1. Most radon fans should be mounted vertically, not sideways, otherwise the bottom portion of the fan will fill with water from condensation.

2. This fan is mounted to the duct pipe with electrical tape! (They could have at least used duct tape.)

4. Worst of all, this fan is mounted in a living area of the home. Look below to the the hazard this posed to the family.

Flimsy, plastic, flex duct. Do not use for radon!

In this radon mitigation picture you can see the condition of the plastic vent that was removed from the radon fan mentioned above. This vent will not hold the radon gas very well and is not a suitable or safe vent material even if it was not torn.

The EPA and other agencies specify that the vent pipe to be used in radon mitigation systems is to be strong, PVC pipe. The same type of pipe uses for plumbing waste drains.

Here a furnace, heat duct, booster fan was used to vent radon gas using a dryer vent. This fan housing is not designed for radon and is not air tight in any way. This dryer duct material is very thin and flimsy, similar to that above. It is not safe or in any way suitable for radon mitigation. I can only surmise that it was used because it’s price was a fraction of the cost of a real radon fan, (about 1/5).

Also in this bad excuse for a radon system, the fan is open and the blades are exposed. Vermin could get in or a child could stick a hand in and result in injury.

Does this look right?

Here is a sub-membrane suction vent. Do you see all that caulk holding it together. This installer must have run out of the proper fittings and decided to make his own rather than come back and do it right. You don’t want to see this on your job.

You can see the 2 homemade fittings on the left and the factory fitting on the right.

Radon fan iced up from leak in fitting

Here is a photo that was taken of a radon fan with ice hanging off of it. The fans can pull up to several gallons of moisture from the ground and when the air outside is cold the warm air condensates and drips back down the pipe. All the fittings and connections should be air tight, which means water tight. Here the fitting was not water or air tight and water dripped out and formed ice as if froze.

The warm air in the pipe will usually prevent or defrost most ice on the inside of the pipe.

As with any job that needs to be done, it helps to have the right tools and experience or a knowledgeable guide and instruction to help get you through. Feel free to email me with any questions via the contact form on this site and/or feel free to purchase any of our helpful products. Over the years I have received help and instruction from many people in many places. This web site is under construction in an ongoing effort to try and put as much information and help in one place to make it easier for others looking for radon instruction, radon information or radon resources to help with all needs radon related.

For more detailed information on the proper installation of a radon mitigation system, see the EPA Radon Mitigation Standards, no longer in print. It was the basis for all of the current radon mitigation standards put out by various agencies.